Laozi is traditionally supposed to have flourished during the sixth century BCE (b. 601 BCE). The name literally means “Old Boy.”[1] He is the reputed author of the Tao Te Ching.

The earliest biography of Laozi is in the Record of the Grand Historian by the Han dynasty court scribe and historian Sima Qian (c 100 BCE). Born in Quren, in the district of Hu in the state of Chu, near modern Luyi in Henan province, his proper name was Li Er, and he was also called Dan. Laozi was an archivist of sacred books and perhaps an astrologer in the Royal Library of the Eastern Zhou dynasty (771–256 BCE). According to tradition, Laozi was a senior contemporary of Confucius (551–479 BCE), and Confucius and Laozi were actually supposed to have met. Some scholars, however, believe Laozi lived during the Warring States period (475–221 BCE).

After many years, Laozi became dissatisfied with the corruption of the court of Zhou, the capital of which was located at Luoyang, and he resigned from his post at an advanced age.  Travelling west, he was stopped by the Chinese border guard, Yinxi, at the Hangu Pass, fortified in 361 BCE as the border entrance to the state of Qin. Yinxi asked Laozi to record his thoughts for posterity. This indicates Laozi was well known and respected. The result is the Tao Te Ching, dealing with “the path” (tao) as well as morality (de).

According to the Pearly Bag of the Three Caverns, after receiving the transmission of the Tao Te Ching from Laozi, Yinxi became a disciple of Laozi and attained the Tao after three years.

Tradition says the Tao Te Ching was written about 531 BCE. Some traditions say Laozi travelled to India, where he met the Buddha (563?–483? BCE). Other traditions say he travelled to the Kunlun mountains in Tibet. Archeological research suggests the sayings of the Tao Te Ching were compiled between the fifth and the third centuries BCE. The oldest known, albeit incomplete, version is the Guodian text, dated to approximately 300 BCE. Some scholars believe the Tao Te Ching is an edited compilation of sayings attributed to Laozi according to an oral tradition preserved by his followers, rather than a single work. Although some scholars question whether an original Laozi even existed, to have a following one must have a founder, and even an anthology has a compiler, so someone must have started the Taoist tradition, and someone wrote the words of the Tao Te Ching. We might as well call them “Laozi,” which is an epithet, like “the Buddha,” not a proper name.

The standard version of the Tao Te Ching consists of approximately five thousand characters[2] divided into 81[3] chapters, in two parts entitled “The Path” and “The Good.” However, in some versions the order of the parts is reversed, in which case the Tao Te Ching would begin with chapter 38. There are other variations too, but mostly the different editions of the Tao Te Ching agree.

[2] The Wang Bi version of the Tao Te Ching that I have used has 5279 characters.

[3] 92, an important number in Chinese numerology. 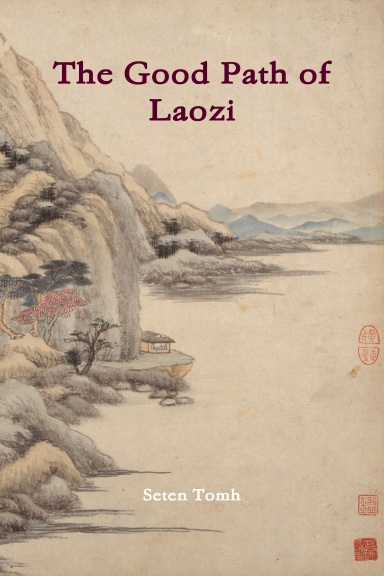 The Good Path of Laozi

Laozi, literally “Old Master,” probably lived during the Warring States period of the 4th century BCE. This was an era in ancient Chinese history characterized by war, as well as bureaucratic and military reforms and consolidation, leading to the first unified Chinese empire known as the Qin dynasty. Laozi was an official in the imperial archives, a scholar who worked as the Keeper of the archives for the royal court of Zhou. This allowed him broad access to the works of the Yellow Emperor and other classics of the time. Laozi never opened a formal school but attracted a large number of students and loyal disciples. Laozi grew weary of the moral decay of life in Chengzhou and, noting the kingdom’s decline, travelled west to live as a hermit in the unsettled frontier at an advanced age. At the western gate he was recognized by the guard Yinxi. The sentry asked the old master to record his wisdom for the good of the country before he would be permitted to pass. The text Laozi wrote was the Tao Te Ching.

無名天地之始    The Nameless is the Beginning of the world.

有名萬物之母    The Named is the Mother of everything.

同出而異名        go together but have different names.