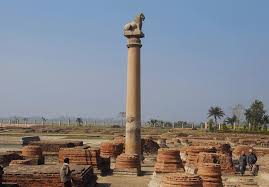 The Buddha is living outside Vesali in a grove to the west of the city. Vesali was the capital of the Licchavi tribe in the Vajjian Confederacy, which the Buddha took as a model for the organization of the sangha. Today it is an archaeological site in Bihar state. It was the birth place of Mahavira, the leader of the Jains during the Buddha’s lifetime. It is also the location where the Buddha went to be trained in meditation by Ramaputra and  Alara Kalama. He preached his final sermon here, and the Second Buddhist Council was held here. At the time of the Buddha Vesali was large, rich, prosperous, and crowded, with abundant food. It was a beautiful city, with 7,707 pleasure grounds (parks?) and 7,707 lotus ponds, inhabited by 7,707 rajahs. This was the home of the royal courtesan and famous dancer, Amrapali, who was a great patron of the city.

The date of this sutta is about the same time as the Mahaparinibbana Sutta, i.e., just before the Buddha’s death at the age of 80, since the Buddha says that he is “now old, aged, burdened with years, advanced in life and come to the last stage: my years have turned eighty.” There is some ambiguity about the date, however, since the text states that during the course of the sutta the Buddha was being fanned by Nagasamala, a task usually reserved for the Buddha’s personal attendant. Nagasamala had been the personal attendant of the Buddha during the first twenty years of the Buddha’s career. However, it is possible that Nagasamala was still a bhikku though no longer the Buddha’s attendant at the end of his life, and was fanning the Buddha. Nagasamala himself could not have been much less than 50 at this time in this case.

Those of you who attended my series of talks on the Digha Nikaya may remember the Licchavi Sunakkhatta, who left the sangha because the Buddha did not perform any miracles or explain to him the beginning of things (DN 24). Subsequently he went to the Vesali Assembly and denied that the Buddha has any superhuman states, distinction in knowledge, or vision worthy of the arhants. He accuses the Buddha of being a rationalist intellectual who was merely following out his own arguments not based on realization or any higher attainments. He asserts that the cessation of suffering is inferior to the attainment of psychic powers. In a sense, Sunakkhatta’s criticism is justified, in the sense that the Buddha did apply intellectual criteria to Brahmanic traditions and sought to identify a rational, non-mythological teaching within the Vedic tradition that had been overgrown by mythological concepts and superstitious beliefs, and he did teach the cessation of suffering as the primary or ultimate goal.

At the same time that Sunakkhatta was addressing the Licchavis Sariputta, the disciple foremost in wisdom, was visiting Vesali on alms round and heard Sunakkhatta’s speech, which he told to the Buddha on his return to the grove where they were staying. The Buddha shrugs off Sunakkhatta’s comments as inspired by anger and points out that the criticism that the Buddha teaches the way to the cessation of suffering is actually a compliment. The rest of the sutta appears as a rebuttal of Sunakkhatta’s criticism of the Buddha, including the Ten Powers of a Tathagata, Four Kinds of Intrepidity, Eight Assemblies, Four Kinds of Generation, Five Destinations and Nibbana, and the Bodhisattva’s Austerities.

The Buddha says that Sunakkhatta will never acknowledge the Buddha’s enlightenment or his psychic powers, consisting of self-multiplication, invisibility, passing through matter, and levitation. We have discussed these psychic powers before and I will not repeat myself here.

The meaning of this sutta is the Discourse on the Great Lion’s Roar, by which he Wheel of Dharma is set rolling, i.e., the dharma age is inaugurated.  We encountered the dharma wheel in the Digha Nikaya, in the story of Mahasuddassana (DN 17), to whom it appeared as a UFO and through which he conquered his neighbours and established a peaceable dharma kingdom.  The sutta enumerates ten powers of a Tathagata by which the Buddha’s primogeniture, viz.

In accordance with the doctrine of the Power of Truth, these understandings are described as “powers.”

The Buddha declares that anyone who denies the attainment of the Tathagata will be reborn in a hellish rebirth. The Buddhist hells must be distinguished from the hell of the Semitic traditions, however, but are rather a kind of purgatory from which rebirth becomes possible once the negative karma is extirpated through suffering.

The Buddha declares that he is fully enlightened and has destroyed the taints, that those things he has declared to be obstructions (sensuality, anger, sloth, agitation, and uncertainty) are obstructions in fact, and that his dharma leads to the end of suffering.

The Buddha describes the four kinds of rebirths: egg-born, womb-born, moisture-born, and spontaneously generated, the latter referring to how devas are reborn. The most interesting thing about this passage is that the Buddha identifies “certain human beings,” as well as devas, hell beings, and some beings of the lower worlds, as spontaneously born.

In addition, he identifies the five types of rebirth: as hell beings, animals, ghosts, human beings, and devas. Later Buddhist tradition would add the anti-gods to this list. Finally he identifies nirvana, which is attained by the individual for himself or herself through gnosis in the present moment, the “now,”  as a result of mental cultivation and the realization of wisdom by which the taints are destroyed.

The Buddha declares that he knows the behaviours that will lead to rebirth in each of these states. In a memorable simile, he compares the experience of nirvana to dallying in a dense woods adjacent to a cool pond of good water after bathing and slaking one’s thirst on a hot day. Far from describing nirvana as an affectively neutral state, the Buddha describes nirvana as “extremely pleasant.”

The Buddha declares that he recalls practising extreme asceticism, coarseness, scrupulousness, and seclusion. The Buddha describes the ascetic practices of northeast India of his time, which we have itemized in our series of talks on the Digha NIkaya, including the memorable passage, “I would make my bed in a charnel ground with the bones of the dead for a pillow.”

Interestingly, the Buddha refers specifically to the “eight day interval of frost,” around late December-early January, during which, he says, he lived outside. We discussed the question of how cold winter gets in northeast India in our series of talks on the Digha Nikaya, since it seems that the Buddha died in late winter, just prior to his 80th birthday.

This sutta also preserves a tradition that we find elsewhere in the Pali Canon, especially in the Theragatha and the Therigatha, whereby a realized person utters a spontaneous poem as an expression of their realization. This tradition became especially important in Tibet as well as Ch’an/Zen Buddhism, where such verses took the form of enigmatic riddles.

The reference to “Purification comes about through food” is also found elsewhere in the Pali Canon. “Nutriment” is an important concept in the canon, but here it refers to self-starvation, a practice that the Buddha practised but then repudiated. Thus, he says, “by such conduct, by such practice, by such performance of austerities, I did not attain any superhuman states, any distinction in knowledge and vision worthy of the noble ones.” The reason that the Buddha gives for this is telling: “Why was that? Because I did not attain that noble wisdom which when attained is noble and emancipating and leads the one who practises in accordance with it to the complete destruction of suffering.” That is, the essential salvific principle is not asceticism or even meditation but Wisdom, through which alone emancipation is attained and suffering completely destroyed. Those of you who have attended my previous talks will know that I frequently emphasize this much neglected point, which subsequently became the basis of the Prajanaparamita tradition of the Mahayana, just about the same time that the Pali Canon was first set to writing. Neither morality nor even meditation is the essential salvific principle, but Wisdom, the cure for ignorance or not-knowing, is that by which complete emancipation is won.

The Buddha repudiates the notion, characteristic of the Ajivikas, a popular sect at the time, that purification comes about through the round of rebirths itself. That is to say the soul passes through a preordained series of experiences in which it experiences every possible state after which it is automatically emancipated. This process takes incalculable eons to complete. But, the Buddha says, he has experienced every possible rebirth except those of the Five Pure Abodes, from which rebirth in the human realm is impossible. Thus, the Buddha distinguishes this attainment from that of the arhants, who are reborn in the Five Pure Abodes if they have not extirpated every vestige of attachment.  Because a bodhisattva is vowed to being reborn as a human being before he becomes a Buddha, this is impossible for him.

Similarly, the Buddha has experienced every kind of abode, sacrifice, and fire ceremony.

The Buddha declares that the lucidity of his wisdom is unimpaired by age, despite the fact that he is 80.

Thus, he declares himself to have fulfilled all of the requisites of Buddhahood.

Nagasamala declares that this sutta makes his body hairs erect. The Buddha declares that he may remember the sutta as “the Hair-Raising Discourse,”  alluding to the fact that by this time the Buddha’s discourses were being memorized by his followers.