Presented to the members of the Riverview Dharma Centre on Saturday, November 25, 2017 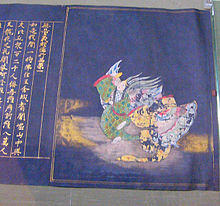 Chapter 1. According to the Lotus Sutra, the Buddha teaches the Sutra of Innumerable Meanings as a prologue to the Lotus Sutra. The Lotus says that the bodhisattvas watch over and are instructed by the sutra. The Buddha enters into a meditation called “the station of innumerable meanings,” characterized by immobility.

The Sutra of Innumerable Meanings is divided into three chapters, on the virtues, preaching, and the ten merits (virtuous conduct, dharma preaching, and ten blessings in Gene Reeves’s translation).

The Sutra of Innumerable Meanings begins with the Buddha on Vulture Peak, accompanied by an assembly of twelve thousand monastics, eighty thousand bodhisattvas, all of whom have obtained the dharma body, i.e., arhantship and nirvana (see below), who know all the dharma ways, and understand the secret of the nature of reality, and a large number of human and non-human beings, including male and female Buddhist monastics and householders, kings, princes, and people in all stations of life.

Desire being dampened, the gateway to nirvana is opened by the practice of breath work (the Tathagata’s dwelling), and the cooling of passions. The realization of interdependent origination and emptiness ameliorates suffering.

The bodhisattva called “Great Adornment” approaches the Buddha, worships him, and praises him in verse for his trans-dual illumination and dispassion, detached even from cognition, and thus having attained that which is beyond thinking, marked with all the signs of greatness. He declares that all living beings are immaterial.

The Buddha reveals himself to the assembly as a trans-dual body of light that is at the same time not a body, with symbolic features, the marks of a superior being, that are not features of a physical body. These are of course the 32 marks of a superior person.

Chapter 2. Great Adornment then asks the Buddha about the dharma of the Tathagata. The Buddha reveals that soon he will enter parinirvana, and that he will answer any questions. Everyone in the assembly asks the Buddha which doctrine facilitates the quick attainment of Perfect Enlightenment. The Buddha declares that the doctrine of Innumerable Meanings facilitates the quick attainment of Perfect Enlightenment. He declares this doctrine as follows:

All dharmas were originally, will be, and are in themselves void in nature and form; they are neither great nor small, neither appearing nor disappearing, neither fixed nor movable, and neither advancing nor retreating; and they are nondual, just emptiness.

The question that Great Adornment asks and the Buddha’s answer definitely confirms what I have been emphasizing all along in my series of talks on the Pali Canon, that wisdom is the salvific principle, everything else being skilled means (upaya). Thus, it is by perfect understanding that one attains perfect enlightenment. The beginning and end of the path are paradoxically the same. Moreover, not all doctrines are equal. Some doctrines are truer and more powerful and effective at facilitating the attainment of perfect enlightenment (doctrine of Power of Truth). According to the Innumerable Meanings Sutra and the Lotus Sutra, the doctrine just articulated is therefore the supreme and essential Buddhist teaching, consisting of the realization that every phenomenon and every moment is essentially empty in nature and form and non-dual or trans-dual, comprehending all contradictions within themselves and therefore inherently binary and non-binary, dual and trans-dual at the same time.

Now it just so happens that this profoundly esoteric doctrine has become the central discovery of the quantum physics, almost 2,400 years after the Buddha’s original enlightenment.

The Buddha goes on to instruct Great Adornment that because of discrimination and self-seeking suffering arises and human beings experience endless transmigration through the cycles of existence. The Buddha advises bodhisattvas to cultivate compassion for all living beings, and to observe the arising (uppada), development (thiti), and cessation (bhanga) of all changing phenomena, realizing that some phenomena produce good results and other phenomena produce bad results because of their nature, leading to pleasure and displeasure, happiness and suffering.

The bodhisattva should next observe that this fourfold process characterizes every moment and instant – nothing is essential and everything arises out of emptiness, cycles within cycles, processes within processes, with no “matter,” no essential substance, at all. All is emptiness.

The Innumerable Meanings originate from one law. This one law is, namely, nonform. Such nonform is formless, and not form. Being not form and formless, it is called the real aspect of things.

This theory of momentariness (khanika-vado) or universal flux produces a paradox, because every moment, being infinitesimal, must exist and not exist simultaneously. To be extended in space or time is to be substantive and thus illusory and transient. This paradox reemerged in the 20th century in the split screen experiment of quantum physics (like Shrodinger’s cat that is both alive and dead at the same time, before it goes through the double split the photon is neither a wave nor a particle). This tells us very clearly that the universe is immaterial.

Through this realization, living beings are disabused of their illusory desire for things, which is impossible, since everything is in flux, no desire can be satisfied, and attain the stable axle of realizing their true nature. Bodhisattvas aid suffering beings, which in turn results in happiness and perfect enlightenment for themselves and others.

Great Adornment is perplexed, complains that the Buddha’s doctrine is incomprehensible, though he does not doubt it (and yet he seems to be uncertain at the same time), and asks him to explain the relationship between all of the previous doctrines taught by the Buddha and this singular new doctrine that he now says alone leads to perfect enlightenment. He declares that this is the highest dharma, which leads to the realization of the tenth stage of the bodhisattva path (see below).

In reply, the Buddha declares all of the bodhisattvas  will attain perfect Buddhahood. He explains that hitherto as a result of sitting under the Bodhi tree for six years[1] he taught different beings according to their various natures, faculties, and attainments and what they needed to do at that time, and compares the doctrine of cleansing water that appears in many different forms, such as streams, rivers, wells, ponds, creeks, ditches, and seas, yet they all have the same essential quality of purification.

All through his teaching, however, the Buddha declares that the essential truth that all dharmas “are naturally vacant, ceaselessly transformed, and instantly born and destroyed,” i.e., the doctrines of non-self-identity, transience, and the chain of causation. This is the purifying water. Although it is a single teaching, according to the differences between beings it is perceived and understood by them differently and thus beings attain to different degrees of realization and develop different schools of thought and practice, all based on their personal preferences and prejudices. Thus, Buddhas appear differently to different beings. Similarly, early, middle, and late teachings do not have the same meaning. Only Buddhas and tenth stage bodhisattvas can understand the ultimately true doctrine. Bodhisattvas who grasp this doctrine fully transcend mortality.

Chapter 3. Great Adornment declares that the Sutra of Innumerable Meanings is three times profound. Those who hear the sutra will obtain the divine powers;[2] the Four Noble Truths; the chain of causation (emptiness); the Six Perfections; the four degrees of attainment culminating in arhantship; and the aspiration to enlightenment (bodhicitta?), whereas those who do not hear it will never achieve Buddhahood. Great Adornment asks the Buddha to explain the sutra, which is inconceivable and profound.

The ten stages are further divided into reversible and irreversible stages. The bodhisattva can fall back from the first six stages into a lower degree of spiritual cultivation. However, once one reaches the seventh degree the certainty of future Buddhahood is assured.

In addition, the eighth-stage bodhisattva is technically equivalent with the attainment of arhantship and nirvana.

Great Adornment vows on behalf of himself and the assembly that they will propagate the dharma and that by their Power of Truth the dharma will be propagated throughout infinite worlds. This alludes of course to the doctrine of the Transfer of Merit.

In conclusion, one can see that the Innumerable Meanings Sutra is less a reaction against the Pali suttas than a deeper exegesis of the Pali recension, including references to the same essential doctrines, including the dharma body, the precepts, concentration (meditation), the salvific power of wisdom, liberation, insight into liberation, the dust of desire, nirvana, the twelvefold chain of causation (interdependent origination), suffering, the non-dual, the body, the 32 characteristics and the 80 features of a superior person, the mental body, mantras, dharanis, emptiness, tranquility, samsara, the six classes of transmigration, metta, the three characteristics, the four modes, the theory of momentariness, dharma nature, the four fruits, the three paths, the 84,000 teachings, skilled means, indifference, the continuity of the Buddhavacana, the Power of Truth, the Four Noble Truths, the Six Perfections, the Tathagata, the Tathagata’s dwelling, parinirvana, and more.

Addendum. Based on two references in chapter 2 to the Mahaprajnaparamita Sutra and the Avatamsaka Sutra, it seems that the Innumerable Meanings Sutra cannot be earlier than the middle of the second century of the common era. Traditionally, it was translated from Sanskrit into Chinese by Dharmajātayaśas, an Indian monk, in 481, though some regard it as Chinese in origin.

[1] This interpretation conflates the length of time that the Buddha practiced asceticism with the attainment of enlightenment under the bodhi tree according to the Pali Canon and ignores his first two meditation teachers.

[2] Bunno et al. have “the realm of dharanis.” Reeves has “entrance to incantations.” The word dharani refers to spells, incantations, powers, or virtues (Bunno, et al., 1975). It is also translated into English as charms or talismans.