The Great Discourse to Sakuludayin 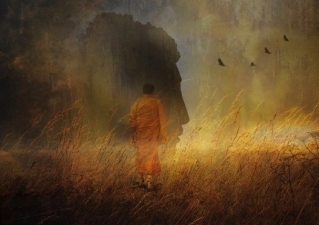 The location of this sutta is the Squirrel’s Sanctuary in the Bamboo Grove, located in or near Rajagaha (modern Rajgir) in Magadha.

The Buddha is frequently portrayed in the Pali suttas as an early bird, waking up too early to go on alms round, as is the case here. Therefore, he goes to the Peacocks’ Sanctuary. Here a number of well-known wanderers were staying, including Sakuludayin. The Buddha addresses Sakuludayin as Udayin, which name I will use henceforth. Here we encounter another familiar motif of the wanderer surrounded by a noisy group of wanderers, discussing and debating with each other in the early morning hours (e.g., see sutta 76). This must have been a common occurrence in 5th cent. BCE n.e. India, and appears to have been imitated in the Tibetan monastic schools, where formal debates were used as a pedagogical device. At the Buddha’s approach, Udayin shushes the crowd of wanderers.

Udayin welcomes the Buddha, and deferentially sits beside him on a low stool, whereupon the Buddha asks what the topic of discussion was that he has interrupted. Deferring the Buddha’s question, Udayin asks a question of his own. We have seen this familiar trope in other suttas too. 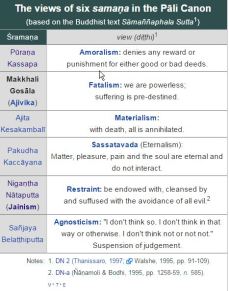 Udayin tells the Buddha that they were discussing the leaders of the sects of the time, including Purana Kassapa, Makkhali Gosala, Ajita Keskambali, Pakudha Kaccayana, Sanjaya Belatthiputta, Nigantha Nataputta (Mahavira), and Gotama himself, asking the question, who is honoured, respected, revered, and venerated by his disciples? How many live in dependence on him? On the contrary, all of these sects are notorious for dissension, except that of Gotama.

We recognize in these names the major sectarian philosophies of the Buddha’s time: amoralism, fatalism, materialism, eternalism, agnosticism, restraint (Jainism), and Buddhism respectively.

The Buddha then asks Udayin to name five qualities for which the Buddha is honoured and respected. The Buddha clearly enjoys setting these sorts of didactic traps, in which he undermines his interlocutor’s assumptions by asking apparently innocuous but probing questions. Udayin names:

All of these are essentially ethical precepts. However, the Buddha says that they are all untrue and gives examples to prove it. Thus, the Buddha sometimes eats the full contents on his alms bowl or even more; he wears fine robes; he accepts invitations to eat fine foods; he lives in gabled mansions; and he is surrounded by an entourage, both monastic and sectarian, both male and female. This self-description is consistent with many passages we find in the Pali Canon, which in a future work I will be collecting into groups with similar implications as a basis for understanding the Pali Canon. The Buddha did not lead an ascetic lifestyle. He freely admits in this passage that there are many monastics who live more ascetic lives than he does. I am reminded of the Buddha’s derisive description of all of the ethical precepts and practices in the Brahmajala Sutta, the first sutta of the Sutta Pitaka. Rather, the Buddha says, than honouring and respecting him for such qualities, Udayin should praise him for the higher virtues, knowledge and vision, the higher wisdom, the Four Noble Truths, and the Way to Develop Wholesome States. The difference between these qualities and the former ones is clear. The five qualities for which Udayin would praise the Buddha are clearly external, superficial, mechanical observances of the same sort that the Buddha criticizes in other suttas. The qualities for which he should be truly praised are, on the contrary, internal, profound, and mindful. Similarly, elsewhere the Buddha states that the Three Higher Trainings supersede the Vinaya. In addition, in the Brahmajala Sutta the Buddha says that the Tathagata should be praised for his wisdom, not for his practice of morality.

Thus, the Buddha declares that he possesses the supreme aggregates of virtue and wisdom; direct knowledge, or gnosis; the truths concerning suffering or angst; and the way to develop wholesome states, consisting of mindfulness; striving; spiritual power; transcendence; the kasinas; the spiritual faculties; the powers; the factors of enlightenment; the path; the liberations; the jhanas, or ecstasies; insight; the mental body; paranormal powers; clairaudience; telepathy; memory of past lives; clairvoyance; and finally the destruction of the taints, the latter synonymous with emancipation. These nineteen components of the Way to Develop Wholesome States constitute a classification of the Buddhist path, more extensive than the Noble Eightfold Path, wherein the NEP is merely one Part. The nineteen components each seem to be independently capable of leading to consummate and perfect gnosis, since each one ends with a repetition of the statement that “thereby many disciples of mine abide having reached the consummation and perfection of direct knowledge.” At the same time, we must admit that the sequence of components represents a kind of development leading to emancipation. We have encountered most of the components of this way to develop wholesome states in previous suttas, especially the Four Foundations of Mindfulness, the Noble Eightfold Path, the Four Jhanas, the recollection of past lives, and the destruction of the taints.  I’m assuming that by this point I don’t need to explain any of these. However, I would like to discuss the Ten Kasinas, since I believe this is the first sutta in which these have come up as a topic.

I have mentioned before how the Pali Canon really just glosses the Buddhadharma. This is especially true of the practice or exercises, which are often just alluded to. The Ten Kasinas are no exception. The Buddha simply refers to contemplating the earth, water, fire, air, blue, yellow, red, white, space, and consciousness kasinas, which are contemplated “above, below and across, undivided and immeasurable.” The word “kasina” means “whole, entire.”

The kasinas seem to represent ten cosmic elements of being – four elements, four colours, space, consciousness; above, below, undivided, and immeasurable. By contemplating progressively more elemental and subtle states of being, the “vibration” level or “frequency,” for lack of a better word, of one’s consciousness state adjusts to that level. Thus, one is able to induce progressively subtle levels of meditation by means of the kasina meditation, which also develops the mental power of concentration or will. Like the Four Roads to Power, which appear in this list as the Four Bases of Spiritual Power, consisting of zeal, energy, mind, investigation, the kasina meditation has a tantric flavour inasmuch as it emphasizes visualization and concentration much like some, admittedly more complex, later tantric practices associated with mandalas. The kasinas seem to be similar to the tattvas of Hindu Tantric tradition, which also entered the Western esoteric tradition through the Hermetic Order of the Golden Dawn. Thus, it is widely regarded with some suspicion as “edgy” or potentially dangerous, even though it was clearly recommended by the Buddha (see, for example, Ajahn Sudhiro, “Benefits and Dangers of Kasina Meditation”; Bhavana Society of West Virginia, “The Dangers of Kasina Meditation” on YouTube).

The kasina system of meditation is described in the Visuddhimagga, written by Buddhaghosa about 830 years after the Buddha’s passing on (parinibbana). All that the sutta says is that “one contemplates the … kasina above, below and across, undivided and immeasurable. And thereby many disciples of mine abide having reached the perfection and consummation of direct knowledge.” The method as taught today in the Theravada tradition involves focusing the attention on a representation of the element, such as a clay disk for earth. Over time one develops an eidetic image in the mind, which then becomes the object of concentration. This is similar to how an unnamed monastic visited the deva realms in sutta 11 of the Digha Nikaya. This requires great mental concentration as well as involving the visualization faculty of the brain, which we now know stimulates the right or latent hemisphere of the brain, associated with mystical experiences. We know that the brain processes images very differently from verbal or textual information, which encode information much more efficiently than text. This is how ancient and medieval memory systems worked, called the method of loci or memory or mind palace. Visualization is one of the core techniques of Tantra too.

The Way to Develop Wholesome States

Four Bases for Spiritual Power:  zeal, energy, purity of mind, investigation. These are identical with the Four Roads to Power that appear in several suttas in the Digha Nikaya.

The Eight Liberations: (1) Possessed of material form, one sees forms; (2) Not perceiving forms internally, one sees forms externally; (3) One is resolved only upon the beautiful; (4) Space is infinite; (5) Consciousness is infinite; (6) There is nothing; (7) the base of neither perception nor non-perception; (8) cessation of perception and feeling. Note the similarity of the Eight Liberations to the Eight Jhanas.

Insight Knowledge: The meaning seems to be that the four great elements are represented by blue, yellow, red, and white threads, like the colours of the kasinas. The body, made up out of the same four elements, is like the threads, on which is strung a beautiful eight-faceted beryl gem of purest water, well cut, clear and limpid, possessed of all good, representing consciousness. Thus, consciousness is supported by and bound up with the body without being identical with it. Similarly, in his statement on his reincarnation, the Dalai Lama states that “things are preceded by things of a similar type.” Thus, mental and physical causes result in effects of the same kind. Thus, physical causes produce material effects and mental causes create psychological effects. The body may obstruct the manifestation of consciousness, but the body, essentially unconscious and inanimate, cannot be its cause. Therefore, consciousness and body are distinct, but commingled.

The Mind-Made Body: Similarly, the mental body is generated by the psychosomatic complex, like pulling a reed from its sheath, a sword from its scabbard, or a snake from its slough. We know from other suttas that the way to create the mental body to which the Buddha alludes involves the attainment of the fourth jhana.

The Kinds of Supernormal Power: Self-multiplication, invisibility, passing through matter, levitation. We have encountered these before, of course, where I have noted the similarity of these powers to powers exhibited in three contexts that are known to us: dreaming, psychedelic experience, and the UFO experience, which is related to paranormal experiences in general. Although rare, these are experienced. About 5% of the population have seen a UFO (half of these, or 2.5%, were contact experiences), whereas about 20% have had some sort of paranormal experience.

The Divine Ear Element: This is commonly termed clairaudience, and includes hearing both divine and human sounds, both far and near.

Understanding the Minds of Others: The description doesn’t quite rise to the level of telepathy, since only broad mental states are intuited, but it comes close including the ability to recognize minds that are liberated and not liberated. This is also a power of a Buddha.

The Recollection of Past Lives: Note the cosmological reference to eons of world-contraction and expansion. Richard Gombrich has noted that the recollection of past lives is paradoxical. Since samsara has no beginning, therefore one’s past lives would be infinite, but since memory is finite, how can one remember all of one’s past lives?

The Divine Eye: The Divine Eye confers the capacity to discern the karmic patterns of cause and effect including the state of other individuals’ rebirths.

The Destruction of the Taints: Note that the Mahasakuludayi Sutta represents the destruction of the taints, in which mind becomes like a clear, limpid, and undisturbed lake, as a way rather than as the goal or result of the way, corresponding presumably to a mode of meditation.

According to the postscript, Udayin was satisfied and delighted in the Blessed One’s words, but there is no indication that he converted.